Darragh Healy Bidding To Follow In His Father’s Footsteps 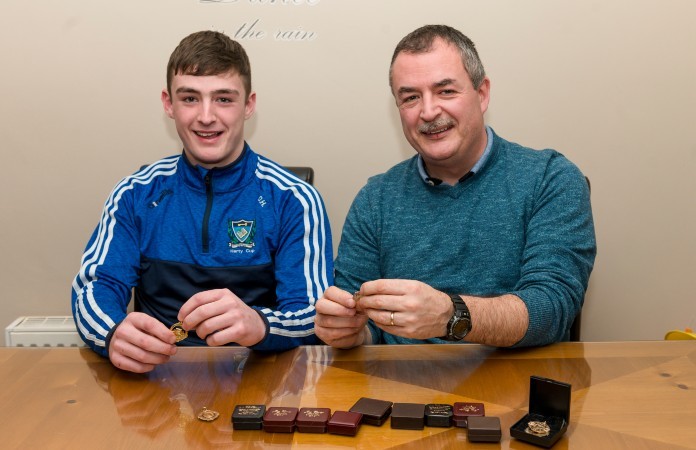 Published: over 2 years ago

WINNING A Harty Cup is a special moment in any hurler’s life.

The prestigious Munster hurling competition is fervently followed by Alumni and current pupils alike, brightening up many a wet winter Wednesday with white-hot competition on the hurling field.

Pat Healy was lucky enough to “share that special bond” with his St Flannan’s side that reigned victorious in 1987, before capturing All-Ireland glory, and the Clarecastle man is hoping his son Darragh can now do the same this Saturday.

“Hopefully they get over the line and win it but when you are 17 or 18 you may not always appreciate the moment or that the people you play with Saturday, that you will have a bond with that group forever. And that’s not an overestimation. Ger Rodgers, who I played with all those years ago, text me before the abandoned final recently to wish Darragh well. And that’s 33 years after we won it. That will supercede any one game,” Pat says.

Pat’s link to the past and present has him shocked that it’s been 33 years since he lifted the cup, but he also says the game has changed so much.

“The game is all about possession now and the running game is just what they do. Tom Hennessy was in goals for us in ’87 and if he took a short puck-out to the corner-back he would have been instantly subbed off,” Pat laughs.

“We were lucky that there were still a lot of boarders at the time, so we managed to attract a lot of really good players. We had six Limerick county minors and by the time we finished up that year I think all 15 players were a county minor of either Limerick, Tipp, Galway or Clare.

“Anthony Daly would be the real stand-out name from that team, but you had Tom Hennessy, Turlough Herbert, Pat ‘Beefy’ Heffernan, Mike McNamara and Ger Rodgers that played with their counties also. We had quite a lot of big names,” Pat recalls.

With quite a formidable defence, Pat, a full-forward, joked that training was “fun”.

Pat is humble about his own achievements post-Flannan’s as he won a junior All-Ireland with Clare in 1993, as well as representing the county at minor, U-21 and senior level.

“I played with the senior side in 1996 but that great Ciarán Carey point against us ended my involvement,” he laughs.

Pat says he will be more nervous watching Darragh than he was playing as, “when you’re playing, you’re in the zone and you have that element of control.”

Speaking with Darragh, nerves are never going to be an issue by the sounds of it. Darragh captained the Clare minors in 2018 and also played a minor final in Cusack Park in front of a crowd, which he thinks have stood him in good stead.

The Leaving Cert is a welcome, or unwelcome, distraction for Darragh as his side eagerly await their weather-delayed date with destiny and he says the team are ready to roll.

“When we got on the team bus to go to Mallow, we thought it would definitely be on as it was too late then to call it off, but here we are. The weather hasn’t been kind the last few weeks but we’re still training a good bit and have played some challenge matches, so we’d be fairly confident still going into it. We’re in a good place.

“I don’t think there will be any nerves. A lot of the lads have played in Munster finals with the Clare minors and things like that. We’re used to playing big games.

“When you have people like Brendan Bugler and Tony Kelly and Jack Browne and Kevin O’Grady around you it such a big help. Kevin may not be known as much as the others, but he has done so much work for us in the last two years. He is very, very good,” Darragh said.

While, rightly, Darragh heaps praise on his coaches and mentors, he says his father Pat has been the biggest influence and help in his hurling life.

“From the minute I started playing it was him that taught me. From U-12 to U-16 he was the manager of our team and he helped me a lot. Even at home, I might be out pucking around and he’ll arrive out and puck with me for an hour or two. Whatever I need he will help me with.

“If I have a big game coming up, he talks to me and helps me with his experience, and he has been there and done it so he is fairly good to have around. He isn’t making it up – he knows what he’s on about,” Darragh finishes.